Rayco Tabares (ESP) has retained his lead in the J/80 World Championship, but a crack has appeared in the Spanish team's seemingly invincible armour, scoring eighth in the last race of a tricky day in the Solent. Luke Patience (GBR) took his first race win, to move up to second place, and Eric Brezellec (FRA) had the best day of all, scoring a 3-3-1 to move up to third for the championship. Jose Maria Van Der Ploeg (ESP) scored 10-10-2 to move up to fourth.

PRO Stuart Childerley moved the scheduled start an hour earlier for racing, and it proved to be an excellent decision. “The low pressure system that came through last night had gone through and we were expecting the weather to become unstable in the afternoon, which is exactly what happened. The wind oscillated through an axis of about 45 degrees today, causing plenty of potential traps for the competitors, and the Race Committee had to adjust the course on many occasions to compensate for the bigger shifts, the mark layers and race management team did a fantastic job today.” 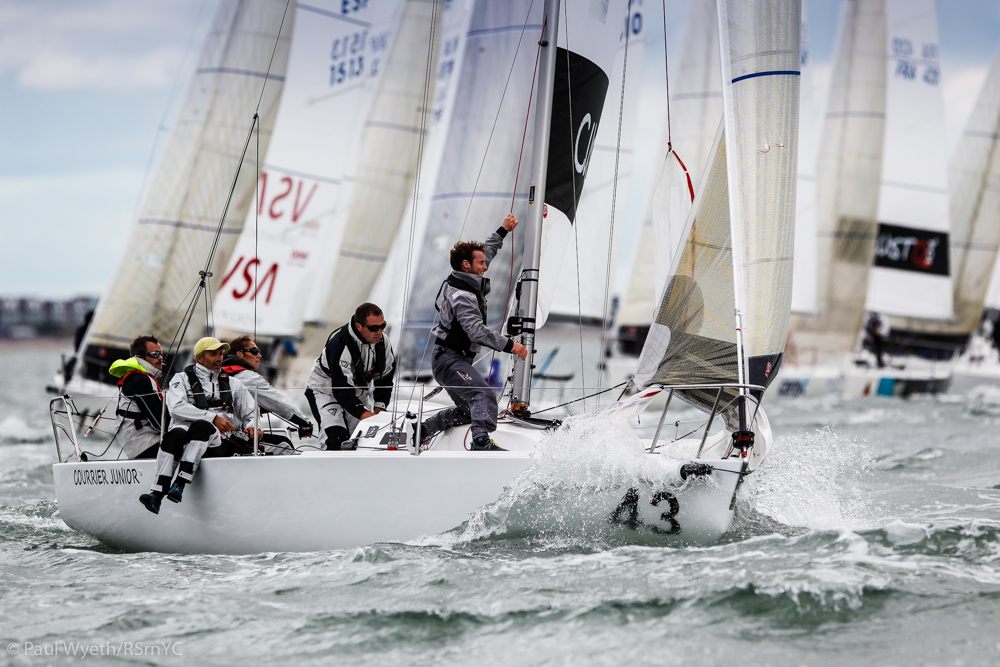 Today's top team was skippered by Breton Eric Brezellec, the last time Eric competed in the UK at the J/80 World Championship was in Falmouth, 2005. His team sailed the boat over 200 miles, from St Malo, with tents on board for regatta accommodation. “Time on the boat is very important, we train a lot.” commented Eric. “Today it was important to take the shifts as they arrived, it was much more open than yesterday. Rayco (Tabares) looks very strong, it looks very hard to beat him, but this regatta has not finished, it is still possible.” 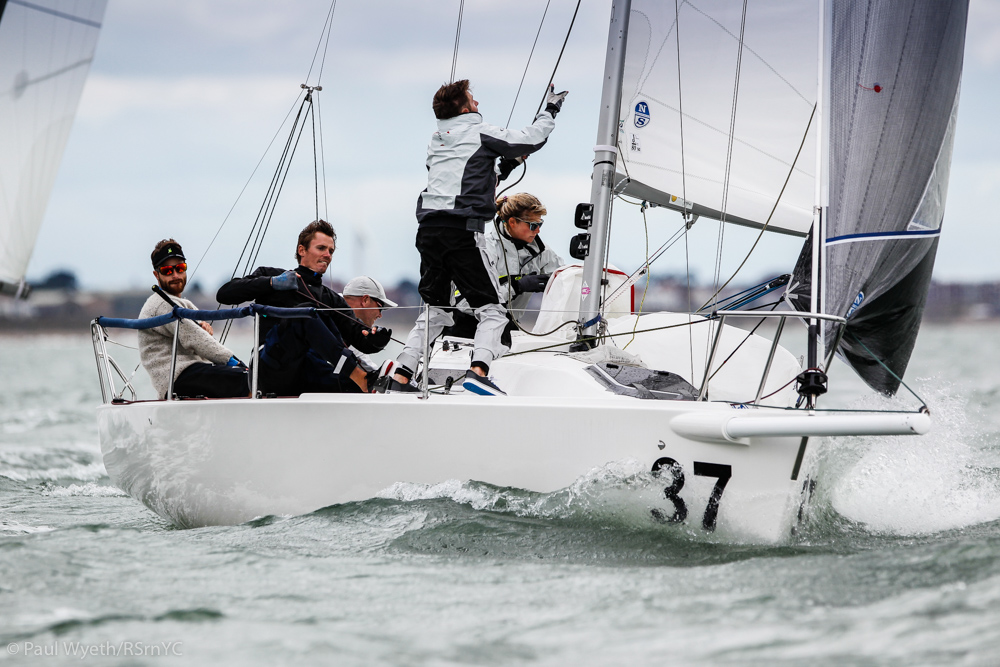 “It would have been very easy to have a shocker today.” commented 470 Olympic Silver Medallist, Luke Patience. “Chris (Grube) did a great job reading the shifts, especially in the penultimate race, but that was a far from an easy race course today. When the wind is coming off the land like that, it can shift both ways. Personally, I tried to concentrate more on driving the boat and that has also paid off.” 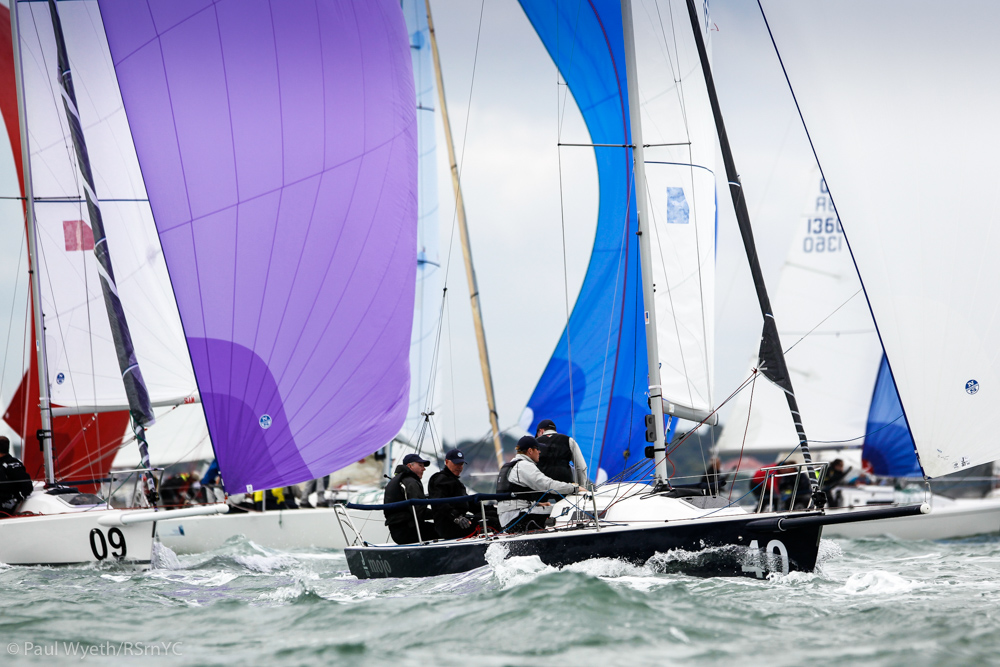 Nigel is racing with Pat O'Neill's Mojo from Howth YC, Ireland. Pat has enjoyed success in many forms of sailing but is new to the J/80 Class. For a new team, Mojo is having a great championship and looking to break into the top ten, which would be an outstanding achievement.

Our main aim is to try to get the boat up to speed.” commented Nigel. “The best place to is the rig tune. The initial set up had too much mast bend, and we could not generate enough power. Before the championship, we calibrated all of the rig settings using the North Sails tuning guide, which has been created through many hours of work by experts. The importance of setting up a rig in a one design boat is massive, our first aim is to get the boat up to what we call fleet speed and therefore competitive. After that you start to learn how you sail the boat, and you find things that suit your own style, which you modify to your own particular preference. Our boat speed was better today and after a great start were in third place at the top mark, eventually finishing the race in sixth. Getting the boat going and improving performance is really rewarding for all of us.”

Royal Southern YC Rear Commodore Sailing, Robert Vose, welcomed competitors to the Prince Philip Yacht Haven. With complimentary beer and burgers, provided by Synergy Grill, the daily prize giving, sponsored by North Sails, was extremely well attended. There was a special prize for Claire Montécot's team racing Startijenn, which broke their rig yesterday. Startijenn was back out racing today, after working through the night, with assistance from Key Yachting. 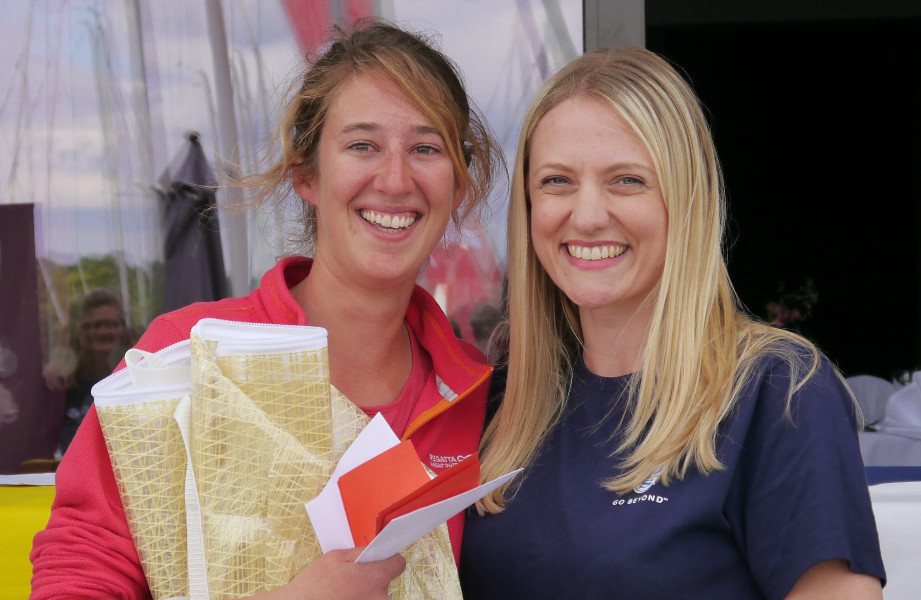 For live updates from the 2017 J/80 World Championship, including video and pictures from the race course: http://www.facebook.com/J80Worlds2017 For more information visit: http://www.royal-southern.co.uk